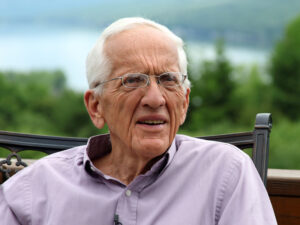 Professor Campbell is an outstanding scientist – a biochemist, who for more than fifty years has studied the impact of food and nutrition on human health. He is the author of over 350 scientific articles, many of which have been published in the leading scientific journals. He is a long-time member of many expert committees, concerning, among other things nutrition policies around the world, and a man who has spent almost all his life and scientific career seeking the truth about the effects of nutrition on human health.

Professor Campbell’s career began with a long-term study conducted in the Philippines, whose aim was to fight malnutrition among children. During this research, Professor Campbell noticed a disturbing correlation between high consumption of protein, and a higher incidence of liver cancer. Studies showed that children from wealthier families were much more likely to suffer from liver cancer, but have better social conditions and access to health care compared to children from poor families. The answer lay in the eating habits of these two groups of children. It turned out that poorer children consumed a diet based mainly on plants with only a minor amount of animal products. This finding determined the direction of Professor Campbell’s future scientific career and made him realize how great a role proper nutrition plays and how few people seem aware of it. Half a century of research by Campbell and other researchers made it possible to formulate a number of important conclusions about what food choices we make every day. Detailed descriptions of these studies and the conclusions from them have been described in the popular scientific books: “Modern principles of nutrition” and “The hidden truth”.

The ideal human diet has been called by Campbell a low-processed diet based on plant products. In practice, this means eating plant products in their least altered – low-processed form. This diet should abound in vegetables, fruits, nuts and seeds, legumes and wholegrain cereals, avoiding sugar, salt and oils. In the Campbell diet, carbohydrates predominate (80%) while protein and fat account for 10%. For most people, this diet seems very restrictive and poor in many flavours, but after one becomes familiar with a plant-based diet, one’s mind is quickly changed.

The advantages of a low-processed diet based on plant products are many, and most importantly, have been proved by scientific studies. Diet is the key to health, which is something one unfortunately rarely hears about. Tests confirm the effect of a plant-based diet in the prevention of many diseases, including: cancer, cardiovascular disease, type II diabetes, arthritis and migraine. In addition, the diet also helps in the treatment of certain ailments, and the effects are sometimes better than in the case of treatment with drugs, whose side effects are certainly not irrelevant to our health.

Professor Campbell has spent several decades researching the effects and mechanisms of a low-processed diet based on plant products. The most likely explanation for its effects is the high content of antioxidants. Oxidation processes are widely present both in the body and in nature. The best example are some fruits that begin to turn brown when cut. In this process of oxidation, free radicals are formed that adversely affect our health and appearance –wrinkles. It is the antioxidants contained in plants that protect us from the effects of free radicals and thus have a positive impact on our health and appearance. Although this is only one theory, the most important is the fact that this diet is effective and has a positive effect on the whole body, which is confirmed by the numerous studies conducted by Professor Campbell and other researchers.